Zeng Jinlian was born on 26 June, 1964, in Hunan province. She was quick growing since her birth. Zeng Jinlian became the tallest woman verified in modern times, in 1981, surpassing Jane Bunford's record. In the year between Don Koehler's death and her own, she surpassed fellow "eight-footers" Gabriel Estêvão Monjane and Suleiman Ali Nashnush. Zeng's growth patterns were close to those of Robert Wadlow, the tallest person.

Zeng Jinlian died on February 13, 1982. After the death her family given her body, to one of hospitals near the village, to find what caused her death. Her family accepted to store her body for medical research. According to one source the skeleton measures 8 ft 1.75 inches (2.48m). 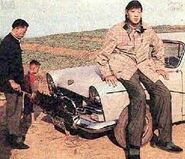