Sultan Kösen (born 10 December 1982) is a Turkish farmer who holds the Guinness World Record for tallest living male at 251 centimetres (8 ft 2.82 in).

Kösen's growth resulted from the conditions gigantism and acromegaly, caused by a tumour affecting his pituitary gland. Due to his condition, he uses crutches to walk.

Born to a Kurdish family in the southeastern city Mardin, he is the sixth tallest man in history.

Kösen, a Turkish man of ethnic Kurdish descent, was born in Mardin, a city in southeastern Turkey. Kösen was unable to complete his education because of his height; he instead worked part-time as a farmer. He describes the advantages of being tall as being able to see a great distance and being able to help his family with domestic tasks such as changing light bulbs and hanging curtains. He lists disadvantages as not being able to find clothes for his legs measuring 126 centimetres (49.61 in) and for his arms with a sleeve length measuring 97 centimetres (38.19 in) or shoes that fit, as well as finding it difficult to fit into an average-sized car.

Starting in 2010, Kösen received Gamma Knife treatment for his pituitary tumour at the University of Virginia Medical School and was provided with medication to control his excessive levels of growth hormone. It was confirmed in March 2012 that the treatment had been effective in halting Kösen's growth.

In October 2013, Kösen married Syrian-born Merve Dibo, who is ten years his junior. In an interview, he said that his biggest problem with his wife is communication, as he spoke Turkish but his wife spoke only Arabic.

On 13 November 2014, as part of Guinness World Records Day, Kösen met, for the first time, the world's shortest man ever, Chandra Bahadur Dangi, at an event in London.

In 2014, Kösen joined the Magic Circus of Samoa and participated in various shows around the world. 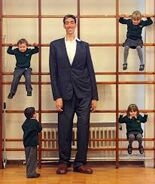