Robert Pershing Wadlow (22 February 1918 - 15 July 1940) also known as the "Alton Giant" and the "Giant of Illinois", was an American man who was the tallest person in recorded history for whom there is irrefutable evidence. He was born and raised in Alton, Illinois, a small city near St. Louis, Missouri. He was also known as: "The Gentle Giant", "Alton Giant", or "Illinois Giant".

Robert Wadlow was born in Alton, Illinois, on February 22, 1918, to Harold Franklin and Addie May (Johnson) Wadlow, and was the oldest of five children. He was taller than his father by age 8, and in elementary school a special desk was made for him, because of his height. By the time of his graduation from Alton High School in 1936, he was 8 ft 4 in (254 cm). He enrolled in Shurtleff College with the intention of studying law. Wadlow required leg braces when walking and had little feeling in his legs and feet. He never used a wheelchair.

Wadlow became a celebrity after his 1936 U.S. tour with the Ringling Brothers Circus, appearing at Madison Square Garden and the Boston Garden in the center ring (never in the sideshow). During his appearances, he dressed in his everyday clothes and refused the circus's request that he wear a top hat and tails.

In 1938, he began a promotional tour with the International Shoe Company, which provided him shoes free of charge, again only in his everyday street clothes. Wadlow saw himself as working in advertising, not exhibiting as a freak. He possessed great physical strength until the last few days of his life.

Wadlow belonged to the Order of DeMolay, the Masonic-sponsored organization for young men, and was later a Freemason. By November 1939, Wadlow was a Master Mason under the jurisdiction of the Grand Lodge of Illinois A.F. and A.M.

On July 4, 1940, during a professional appearance at the Manistee National Forest Festival, a faulty brace irritated his ankle, leading to infection. He was treated with a blood transfusion and surgery, but his condition worsened due to an autoimmune disorder; he died in his sleep on July 15.

A life-size statue of Wadlow was erected opposite the Alton Museum of History and Art in 1986. Singer-songwriter Sufjan Stevens wrote and released a song titled "The Tallest Man, the Broadest Shoulders" in reference to Wadlow, on his 2005 concept album Illinois concerning historical figures and events of the state. 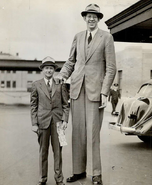