John William "Bud" Rogan (18 February 1868/1867 – 11 September 1905; some sources indicate 1867, and 1871 as his birth year) was an American man who was recorded as the second-tallest person ever, behind only Robert Wadlow. Rogan is also the tallest African American in history.

John Rogan was born in Hendersonville, Tennessee, USA. He was the son of the former slave William Rogan, as the fourth of twelve children. John began to grow very rapidly at the age of 13, due to gigantism. This led to ankylosis (abnormal rigidity of the skeletal joints). By 1882, he could not stand or walk.

Although he could not perform physical labor due to his condition, Rogan made a living by selling portraits and postcards at a train station. An 1897 article in the Kansas City Journal mentions that a number of his drawings were published. Despite his success in this regard, he declined all offers to join carnivals and sideshows. By 1899, he had grown to a height of 8 ft 6 in (2.59 m) and often appeared in newspapers, referred to as the "negro giant". He used a cart like a wheelchair; it was pulled by goats. He was always the center of attention, often noted for his deep voice and playful attitude. Rogan died at the age of 37 on September 12, 1905, due to complications from his ankylosis. It is said however that John was buried under concrete with rocks to prevent doctors from taking his body away for study and avoid grave robbers. Rogan's hands measured 11.5 in (29 cm) in length and his feet measured 13.7 in (35 cm) in length. He grew to 8 ft 6.5 in (2.60cm) tall. but weighed only 176 pounds (79 kg). Rogan is the tallest person of African descent, and remains the second tallest person on record. Robert Wadlow was 20 years old when his height surpassed Rogan's. In an old newspaper article, it is said that his Maternal Grandfather was also a giant, requiring a larger saddle when he rode horses, hinting at the possible genetic inheritance to John.

The area is the current burial point is believed to be on the old Rogana farm lands. Evidence suggests that he was in fact buried there as previous rumors suggest they took him back to their place after his death and buried him in an unmarked grave, covering him in a cement vault. 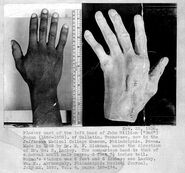 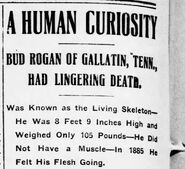